The Latest from the Privia Team

In any winning proposal development process, you need checks along the way to ensure that your team stays on track. Color-coded proposal review sessions, also known as proposal color team reviews, are considered a standard practice for holding organized and effective team reviews at set increments during the proposal process. Although color-coded proposal reviews aren't the only way to check your progress, they do act to standardize the review process and provide guidelines to ensure that all review teams are appropriately staffed and tailored to fit the stage of development that your proposal is in. 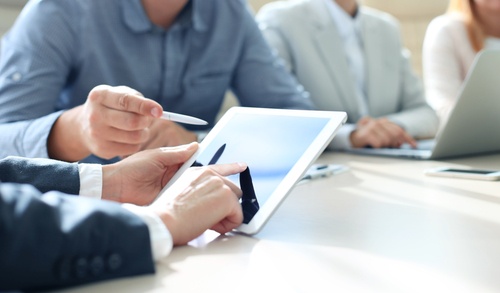 Among other benefits, successful proposal color team reviews help ensure that a proposal is in compliance with all the requirements of an RFP, check for coherence and consistency and ensure that the proposal provides a viable and compelling solution to the project request. While different organizations may "color" their reviews a bit differently, standard color team reviews normally include blue, pink, red, green and gold reviews. Not every review is required, or even recommended, in every bid, but we've laid out what's normally involved with each color team review and shared some of the secrets for conducting more effective and efficient reviews at every stage of your proposal process.

Blue team reviews are the first standard review, conducted when the opportunity is in the identification, qualification or capture stage and the proposal is still in the outline phase. Although it may seem premature to hold a review at such an early junction, blue team reviews can be incredibly useful as they ensure that the basic proposal outline is correct and complete and that the appropriate individuals have been assigned clear roles and responsibilities therein. Blue team reviews should seek to locate discriminators (what makes you different from your competition?) and establish win themes (what message are you trying to convey throughout the proposal? What makes you a viable contender? Why should you be selected?). They can also serve to locate any gaps in information or available resources before they become larger issues later on. Blue team reviews should be tough assessments that gauge whether your organization has the right qualifications and resources to win.

Pink team reviews occur after the proposal has begun being drafted (ideally based on customer procurement documents) but before it has reached an advanced state of completion. These reviews focus on content and intent, checking for consistency between sections and ensuring that narrative themes are maintained throughout. Though pink team reviews have the same goals with respect to compliance and completeness, they should go deeper than the blue team review, paying special attention to things like document format and solving for any content gaps. Pink Team reviews also present an opportunity for leadership to provide a course correction if necessary, so they should occur early enough in the process to allow time for major revisions.

Red Team reviews are a major milestone in any proposal process and usually occur when a proposal is nearly complete. Before a Red Team review is conducted, all comments and suggestions from previous reviews should be addressed and incorporated into the latest version of the document, so as not to duplicate previous efforts. During Red Team, reviewers should adopt the perspective of the customer, asking whether the proposal provides a compelling narrative and if value and aptitude is clearly demonstrated. For these reviews, it's often useful to add a new reviewer to the group to get a fresh perspective — someone who hasn't taken part in previous reviews or doesn't have the same technical background as the subject matter experts.

Green team reviews can occur at any stage, but often occur at or around the same time as red team reviews. Green reviews include a thorough pricing review, wherein pricing information and the pricing format within the proposal is evaluated against RFP stipulations. Green team reviews also double-check the technical aspects of the proposal in regard to pricing viability — essentially ensuring that it's possible to accomplish the proposed solution within that budget. Does the solution fit the price? Is it priced to win? Green reviewers should answer these questions and assess any potential risks that may occur during project delivery that could affect the accuracy of the budget.

Gold team reviews should occur prior to proposal submission. As a final review, they should guarantee that all sections of the document are compliant and formatted correctly for submission (including graphics and tables, if applicable). As you've completed at least three other reviews before this point, there shouldn't be any major changes that need to occur at this stage. Instead, gold reviews should act as a last compliance check before finally handing off the proposal to the client.

Proposal Color Team Reviews are critical to any successful proposal. Tailored reviews, staffed by a top-notch team of great reviewers and supported by modern tech can be a great way to support your proposal process, no matter the size. Cost effective online collaboration provides a powerful discriminator and helps ensure that all the knowledge of your organization is leveraged to win the bid.

You wouldn’t bake a cake without a recipe; take a trip without a map; buy a car without a budget. That's why a proposal process checklist ensure both process...
END_OF_DOCUMENT_TOKEN_TO_BE_REPLACED
Best Practices proposal process
5 minute read

5 Reasons to Hire a Proposal Consultant

Congratulations! You're the lucky recipient of an RFP. Before you jump headfirst into a proposal, it's worth considering the benefits of hiring an experienced consultant...
END_OF_DOCUMENT_TOKEN_TO_BE_REPLACED
Best Practices proposal process
6 minute read

Proposal Best Practices: Use Visuals to Tell Your Story and Increase Your Win Rate

We spoke with Mike Parkinson of 24 Hour Company and Billion Dollar Graphics about the opportunity you have to maximize the potential of your proposal with images and...
END_OF_DOCUMENT_TOKEN_TO_BE_REPLACED